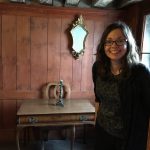 Monique O’Connell is a Professor of History and Chair of the History Department at Wake Forest University. She holds the James P. Barefield Endowed Faculty Fellowship, which recognizes excellence in interdiscuplinary teaching, scholarship, and student mentorship.  In both her research and her teaching, O’Connell is interested in understanding how the men and women of the past made sense of the world they encountered. Her scholarly work focuses on the history of Renaissance Venice and its empire, a topic that has taken her into the details of economic exchange, early print culture, political communication, classicizing rhetoric, clerical conspiracies, and the history of botany.  She earned her undergraduate degree at Brown University (1996), her masters and Ph.D at Northwestern (1999, 2002) and did a post-doctoral fellowship at Stanford University before joining the faculty at Wake Forest in 2004. Her first book, Men of Empire: Power and Negotiation in Venice’s Maritime State (Johns Hopkins University Press, 2009) placed Venice’s overseas holdings into the larger debate on early modern empires and state formation, offering a new reading of how Venice successfully administered a wide swath of diverse territory for hundreds of years. Her second book, co-authored with Eric Dursteler, is entitled The Mediterranean World: From the Fall of Rome to the Rise of Napoleon (2016). She has held residential fellowships at Villa I Tatti, the Folger Shakespeare Library, and the Newberry Library and her work has also been supported by the NEH, the Gladys Krieble Delmas Foundation, and the Renaissance Society of America. She is currently the project editor of Rulers of Venice (rulersofvenice.org).

O’Connell teaches a variety of courses covering medieval and early modern European history, from late antiquity through the seventeenth century.  Many of her courses feature collaborations with different disciplines: her class on “Magic, Science, and Alchemy in Europe, 1400-1700” has several lab components led by a chemistry professor.  They have not yet succeeded at making the Philosopher’s Stone but did put several medieval distillation techniques into practice. In her first year seminar “The Floating City: Public Life in Venice” she worked with a theater professor to include movement workshops and a student performance of Goldoni’s Coffee Shop and with a DH Librarian to digitally recreate an 18th theater. SHe currently teaches modules in the Engineering department on “Engineers before Engineering” and is working a new course of environment and disease in the Medieval World.