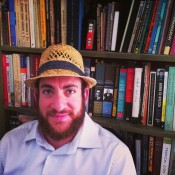 Mir Yarfitz has lived in each of the four corners of the country as well as South and Central America. His enthusiasm for Latin America grew from his college study abroad experience in Nicaragua, a Fulbright in Argentina, and work with migrant farmworker labor unions in Washington, Oregon, and Georgia. Teaching and research interests include US-Latin American relations, cultural production, social movements, dictatorship and resistance, racial hierarchies, migration, gender, sexuality,  masculinity, and transgender studies. His 2019 Rutgers University Press book  Impure Migrations: Jews and Sex Work in Golden Age Argentina, historicizes immigrant Ashkenazi Jews in organized prostitution in Buenos Aires between the 1890s and 1930s and in broader transnational flows of sex workers and moral opposition.

We are not only students of history, but makers of history. In this laboratory-style class, we begin to develop the tools of professional historians, to dig up historical artifacts and make meaning out of them. In addition to digital exploration of online repositories, we visit archives to make new discoveries, and museums to consider how to present history to different audiences. Each of us will become experts in a particular discovered artifact, and together we create a collaborative online “open textbook” which places our artifacts into larger contexts and conversations. While these tools can be used in many fields, the central questions of this course illuminate gender and sexuality in nineteenth and twentieth century world history, across the Americas, Africa, Asia, and Europe, interrogating what happens to ideas about men, women, and sex when different cultural systems evolve and come into contact over time. Multiple genres of source and storytelling introduce women’s leadership and social movement, the development of gender norms and related social categories including masculinity, marriage, medical interpretations of the body, sex work, the consolidation of modern LGBTQ identities, and alternative systems of sexual and gender identity. We move back and forth between the world and Wake, beyond how strange other places and practices have been, to how strange our own assumptions are, as we conclude our class by turning our analytical tools onto our own cultural contexts. (CD,D)